I am an internationally known, NATIVE (American) English speaking, full-time professional voice-over actor, and an avid home brewer. With professional grade recording equipment in my home studio, I can usually record your project within 24 hours of receipt of your final script (often sooner). 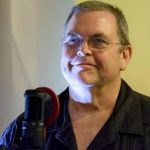 I specialize in the narration of animated whiteboard explainer videos, eLearning courses, nonfiction audiobooks and corporate, industrial, medical & military training tutorials. I also have several local radio & television commercials which have aired in various parts of the country, with an IVR recording and a podcast promo or two sprinkled in here and there.

I served on the boards of the SoCal Media Pros, (a non-profit entity organized to educate media professionals and the public at large about media), and prior to that, the Media and Communications Association International (MCA-I) L.A./Orange County chapter; I am an initiator for Larry Hudson’s VO Heaven workouts (a weekly Skype workout session where voice-over pros of varying degrees of experience gather to work on their reading AND directing skills); I’m an active member of the World Voices Organization (WoVO – an international association of voice actors); The VO Peeps (Anne Ganguzza’s international voice-over networking group); the Orange County Voice Acting Meet-up group (OCVA – the voice-over networking group founded by Tom Jordan); and the American Homebrewers Association